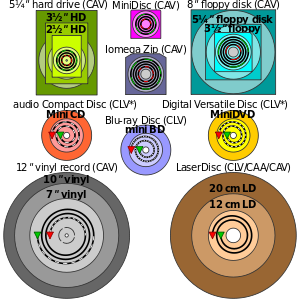 The first MiniDisc to be released in the USA was MTV Unplugged by Mariah Carey on December 7, 1992.

Sony announced they would cease development of MD devices, with last of the players to be sold by March 2013.

Market history
Sony’s MiniDisc was one of two rival digital systems, introduced in 1992, that were both targeted as a replacement for the Philips analog cassette audio tape system: the other was Digital Compact Cassette (DCC), created by Philips and Matsushita. Sony had originally intended for Digital Audio Tape (DAT) to be the dominant home digital audio recording format, replacing the analog cassette. Due to technical delays, DAT was not launched until 1989, and by then the U.S. dollar had fallen so far in relation to the yen that the introductory DAT machine Sony had intended to market for about $400 in the late 1980s now had to retail for $800 or even $1000 to break even, putting it out of reach for most users.

Relegating DAT for professional use, Sony set to work to come up with a simpler, more economical digital home format. By the time Sony came up with MiniDisc in late 1992, Philips had introduced a competing system, DCC (the digital compact cassette). This created marketing confusion very similar to the Beta versus VHS battle of the late 1970s and early 1980s. Sony attempted to license MD technology to other manufacturers, with JVC, Sharp, Pioneer, Panasonic and others all producing their own MD systems. However, non-Sony machines were not widely available in North America, and companies such as Technics and Radio Shack tended to promote DCC instead.

Despite having a loyal customer base (primarily musicians and audio enthusiasts), MiniDisc met with only limited success. It was relatively popular in Japan during the 1990s but did not enjoy comparable sales in other world markets. Since then, Recordable CDs, flash memory and HDD-based digital audio players introduced in 1998 have become increasingly popular as playback devices.

The initial low uptake of MiniDisc was attributed to the small number of pre-recorded albums available on MD as a relatively small number of record labels embraced the format. The initial high cost of equipment and blank media was also a factor. Stationary MiniDisc player/recorders never got into the lower price ranges, and most consumers had to connect the portable player to the hi-fi in order to record. This inconvenience contrasted with the earlier common use of cassette decks as a standard part of an ordinary hi-fi set-up.

MiniDisc technology was faced with new competition (CD Consortium) from the recordable compact disc (CD-R) when it became more affordable to consumers in 1996. Initially, Sony believed that it would take a decade for CD-R prices to become affordable (starting at about $12 per blank CD-R disk in 1994). But the prices fell very quickly, to the point where CD-R blanks sank below $1.00 by the late 1990s, compared to around $2.00 for similar 80-minute MiniDisc blanks.

The biggest competition for MiniDisc came from the emergence of MP3 players. With the Diamond Rio player in 1998, the mass market began to eschew physical media in favor of file-based systems.

By 2007, because of the waning popularity of the format and the increasing popularity of solid-state MP3 players, Sony was producing only one model, the Hi-MD MZ-RH1 (also available as the MZ-M200 in North America packaged with a Sony microphone and limited Macintosh software support).

The introduction of the MZ-RH1 allowed users to freely move uncompressed digital recordings back and forth from the MiniDisc to a computer without the copyright protection limitations previously imposed upon the NetMD series. This allowed the MiniDisc to better compete with HD recorders and MP3 players. However, even pro users like broadcasters and news reporters had already abandoned MiniDisc in favor of solid-state recorders, due to their long recording times, open digital content sharing, high-quality digital recording capabilities and reliable, lightweight design.

On July 7, 2011, Sony announced that it would no longer ship MiniDisc Walkman products as of September 2011, effectively killing the format.

On February 1, 2013, Sony issued a press release on the Nikkei stock exchange that it will cease shipment of MD devices, with last of the players to be sold in March 2013. However, they will continue to sell media and offer repair services.

MD Data
MD Data, a version for storing computer data, was announced by Sony in 1993 but never gained significant ground. Its media were incompatible with standard audio MiniDiscs, which has been cited as one of the main reasons behind the format’s failure.

MD Data could not write to audio-MDs, only the considerably more expensive data blanks. In 1997, MD-Data2 blanks were introduced, which held 650 MB of data. They were only implemented in Sony’s short-lived MD-based camcorder (the DCM-M1) as well as a small number of MultiTrack Recorders; Sony’s MDM-X4, Tascam’s 564 (which could also record using standard MD-Audio discs, albeit only 2 tracks), and Yamaha’s MD-8, MD-4, & MD4S.

The Hi-MD format, introduced in 2004, marked a return to the data storage arena with its 1 GB discs and ability to act as a USB drive. Hi-MD units allow the recording and playback of audio and data on the same disc, and are compatible (both audio and data) with standard MiniDisc media. (An 80 minute Minidisc blank can be formatted to store 305MB of data)