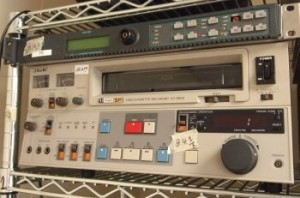 Be noted: this service is for the modern video8, 8mm, hi8 or digital8 video tapes. NOT for the old 8mm cinefilm reels.

The Video8 format was launched by Sony in the mid-1980s. It was the first “mini” cassette for camcorders and was a significant size reduction from the full-sized VHS cassettes.

The horizontal resolution of Video8 was 240 lines, the same as VHS. Initially Video8 had much better audio quality due to the FM helical-scan recording, but this later became standard in VHS as well.

While Sony was being trounced in the Betamax vs VHS war, the Video8 format performed well in the camcorder market. Then the compact VHS-C cassette was introduced and brought serious competition. Video8 was well established and preferred by technical enthusiasts, but had the severe disadvantage of not being playable in VHS machines. VHS-C used an adaptor so the tape could go straight from the camcorder to the VCR.

There was never any clear winner in this war before digital video made them both obsolete, but Video8 probably fared better overall.