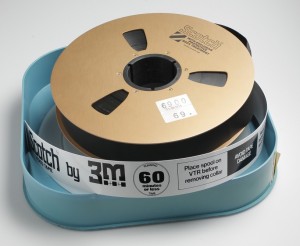 Transfer 2″ videotape to digital format. (DVD, Blu-Ray, AVI, or any other format)

2-inch quadruplex videotape (also called 2″ quad, or just quad, for short) was the first practical and commercially successful analog recording videotape format. It was developed and released for the broadcast television industry in 1956 by Ampex, an American company based in Redwood City, California. This format revolutionized broadcast television operations and television production, since the only recording medium available to the TV industry before then was film used for kinescopes, which was much more costly to utilize and took time to develop at a film laboratory. In addition, kinescope images were usually of obviously inferior quality to the live television broadcast images they recorded, whereas 2″ videotape preserved almost all the image detail of a live broadcast.

Since most United States West Coast network broadcast delays done by the television networks at the time were done with film kinescopes that needed time for developing, the networks wanted a more practical, cost-effective, and quicker way to time-shift television programming for later airing on the West Coast. Broadcasters also sought a recording medium that was not as costly or time-consuming to edit and develop as film. Faced with these challenges, broadcasters sought to adapt magnetic tape recording technology (already in use for recording audio) for use with television as well.