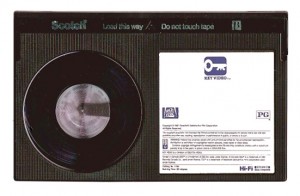 Transfer Betamax tape to digital format. (DVD, Blu-Ray, AVI, or any other format)

Betamax (also called Beta, and referred to as such in the logo) is a consumer-level analog videocassette magnetic tape recording format developed by Sony, released in Japan on May 10, 1975. The first Betamax introduced in America was the LV-1901 console, which included a 19″ color monitor, and appeared in stores in early November, 1975. The format is virtually obsolete, having lost the videotape format war.

Like the rival videotape format VHS (introduced in Japan by JVC in October 1976 and in the United States by RCA in August 1977), Betamax had no guard band and used azimuth recording to reduce crosstalk. According to Sony’s own history webpages, the name came from a double meaning: beta being the Japanese word used to describe the way signals were recorded onto the tape, and from the fact that when the tape ran through the transport, it looked like the Greek letter beta (β). The suffix -max, from the word “maximum”, was added to suggest greatness.

Betamax and VHS competed in a fierce format war, which saw VHS come out on top in most markets.