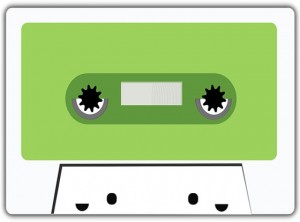 Transfer Cassette Tape to Digital (CD, MP3 or any format)

The Compact Cassette or Musicassette (MC), also commonly called cassette tape, audio cassette, or simply tape or cassette, is a magnetic tape recording format for audio recording and playback. It was designed originally for dictation machines, but improvements in fidelity led the Compact Cassette to supplant the Stereo 8-track cartridge and reel-to-reel tape recording in most non-professional applications. Its uses ranged from portable audio to home recording to data storage for early microcomputers. Between the early 1970s and the late 1990s, the cassette was one of the two most common formats for prerecorded music, first alongside the LP record and later the compact disc.

Compact Cassettes consist of two miniature spools, between which a magnetically coated plastic tape is passed and wound. These spools and their attendant parts are held inside a protective plastic shell. Two stereo pairs of tracks (four total) or two monaural analog audio tracks are available on the tape; one stereo pair or one monophonic track is played or recorded when the tape is moving in one direction and the second pair when moving in the other direction. This reversal is achieved either by manually flipping the cassette, or by having the machine itself change the direction of tape movement and head respectively (“auto-reverse”).

Transfer cassette tape to CD, MP3 or any other digital format.

Canaan has been dedicated to preserving cassette tape to CD for many years.
You should convert your old cassette tape to CD’s because CD’s do not wear with repeated play and have a shelf life of decades. We have converted thousands of cassette tape for our clients. With lots of experience, top notch equipment and software, we can improve the sound of your original cassette tapes.

We offer very reasonable pricing and also provide generous discounts for large collections. We can also provide additional copies of your master CD for your friends, family or backup for just 7.99 each.
Our turnaround time is generally 10-14 days from the time we receive your tapes. Sometimes, the work is done and shipped back to you in just a few days. Depends on our workload at the time.

What’s Included with your cassette tape to CD transfer

Canaan is proud to be the digitization service provider for your Cassette Tapes. Sometimes the running time of a cassette tape will not be known until after the work in complete,  then only minimum payment is required which is $14.99 if this is the case.