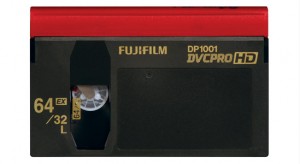 Transfer DVCPRO tape to digital format. (DVD, Blu-Ray, AVI, or any other format)