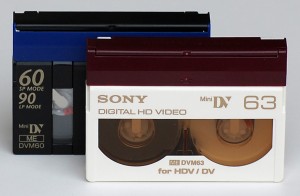 Transfer HDV tape to digital format. (DVD, Blu-Ray, AVI, or any other format)

Stands for “High-Definition Video.” According to a consortium of manufacturers including Sony, JVC, Canon, and Sharp, it is a “consumer high-definition video format.” HDV is the next step up from Mini DV, which has been used in consumer digital camcorders for several years. The HDV technology allows high-definition video to be recorded on a Mini DV tape, using MPEG-2 compression.

Of course, recording in high-definition requires an HD camcorder. These cameras are significantly more expensive than their Mini DV counterparts, but can capture much higher quality video. HDV uses a native 16:9 widescreen format, with a resolution of 1280 x 720 pixels. This is a substantial improvement over Mini DV, which records video in a 4:3 format, with a maximum resolution of 500 horizontal lines. Most HDV camcorders allow the user to record in standard DV as well.

HDV is a format for recording of high-definition video on DV cassette tape. The format was originally developed by JVC and supported by Sony, Canon, and Sharp. The four companies formed the HDV consortium in September 2003.

Conceived as an affordable high definition format for digital camcorders, HDV quickly caught on with many amateur and professional videographers due to its low cost, portability, and image quality acceptable for many professional productions.

HDV and HDV logo are trademarks of JVC and Sony.

Generally, HDV devices are capable of playing and recording in DV format, though this is not required by HDV specification.