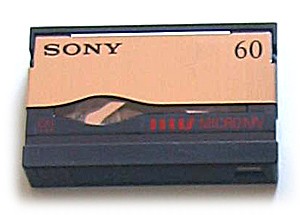 MicroMV was a proprietary videotape format introduced in October 2001 by Sony. This videocassette is physically smaller than a Digital8 or DV cassette. In fact, MicroMV is the smallest videotape format — 70% smaller than MiniDV or about the size of two US quarter coins. MicroMV was the first helical scan tape system using MR read head introduced to the market. Each cassette can hold up to 60 minutes of video.

MicroMV has not been a successful format. Sony was the only electronics manufacturer to sell MicroMV cameras. As of January 2006, Sony does not offer any new MicroMV camcorder models.

Sony’s MicroMV format has brought the trend of miniaturizing video equipment to a whole new level. If you thought “Mini” DV tapes and camcorders were small, then this next step was certainly to “micro” — with 70 percent smaller tape cartridges, and cameras that weigh under one pound. Even compared to MiniDV camcorders, these MicroMV units are significantly lighter to pack and carry, and small enough skip the camera case and just carry in a coat pocket.

How small is the MicroMV cassette? You can describe it as smaller than a matchbox, or about the size of two quarters, or smaller and thinner than half a MiniDV cassette. That is small, indeed.

As this kind of equipment gets smaller and smaller, however, there comes a point when the trade-offs become too severe, as the LCD screens get too small to view details and the buttons become too tiny to control reliably with your fingers. These really are personal preferences, however, and depend on how the camcorder fits into your hands and with your shooting style.