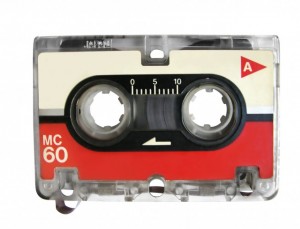 The Mini-Cassette, often written minicassette, is a magnetic tape audio cassette format introduced by Philips in 1967. It is used primarily in dictation machines and was also employed as a data storage for the Philips P2000 home computer. Unlike the Compact Cassette, also designed by Philips, and the later Microcassette, introduced by Olympus, the Mini-Cassette does not use a capstan drive system; instead, the tape is propelled past the tape head by the reels. This is mechanically simple and allows the cassette to be made smaller and easier to use, but produces a system unsuited to any task other than voice recording, as the tape speed is not constant (averaging 2.4 cm/s) and prone to wow and flutter. However, the lack of a capstan and a pinch roller drive means that the tape is well-suited to being repeatedly shuttled forward and backward short distances as compared to microcassettes, leading to the Mini-Cassette’s use in the first generations of telephone answering machines, and continuing use in the niche markets of dictation and transcription, where fidelity is not critical, but robustness of storage is, and where analog media are still widely preferred.

Canaan digitizes your old Minicassette Tapes into digital format in a professional way ( minicassette to mp3, minicassette to CD). Due to the nature of the work, the running time of a minicassette tape will not be known on most orders until after the work in complete, only minimum payment is required which is $34.99 if this is the case.