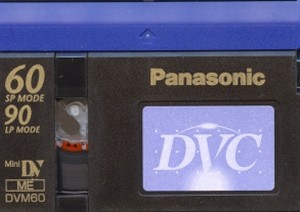 Transfer MiniDV tape to digital format. (DVD, Blu-Ray, AVI, or any other format)

Most digital camcorders record video and audio on a MiniDV tape. A MiniDV tape that is 65 meters long can hold an incredible 11GB of data, or 80 minutes of digital video.

The small size of MiniDV tapes has helped camcorder manufacturers reduce the size of their video cameras significantly. Some consumer cameras that use MiniDV tapes are smaller than the size of your hand.