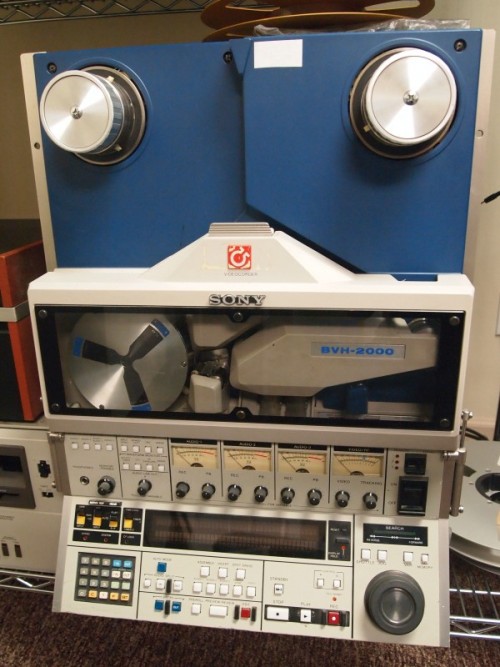 In addition to ¼” tape, studio and multitrack machines use tape widths of ½”, 1″ and 2″, and at least one 3″ machine was available for a time.

Canaan is proud to be one of the few service providers in the United States which provide digitization service for these professional reels.

Reel-to-reel/open-reel tape recording is the form of magnetic tape audio recording in which the recording medium is held on a reel, rather than being securely contained within a cassette.

In use, the supply reel or feed reel containing the tape is mounted on a spindle; the end of the tape is manually pulled out of the reel, threaded through mechanical guides and a tape head assembly, and attached by friction to the hub of a second, initially empty takeup reel.

The reel-to-reel format was used in the earliest tape recorders, including the pioneering German-British Blattnerphone machines of the late 1920s which used steel tape, and the German Magnetophon machines of the 1930s. Originally, this format had no name, since all forms of magnetic tape recorders used it. The name arose only with the need to distinguish it from the several kinds of tape cartridges or cassettes such as the endless loop cartridge developed for radio station commercials and spot announcements in 1954, the full size cassette, developed by RCA in 1958 for home use, as well as the compact cassette developed by Philips in 1962, originally for dictation.

Reel-to-reel tape was also used in early tape drives for data storage on mainframe computers, video tape recorder (VTR) machines, and high quality analog audio recorders, which have been in use from the early 1940s, up until the present. Studer, Stellavox and Denon still produced reel to reel tape recorders in the 1990s, but currently only Nagra, Otari, and Mechlabor continue to manufacture analog reel-to-reel recorders.

If you have ¼” open reels, please click here to go to that product page!